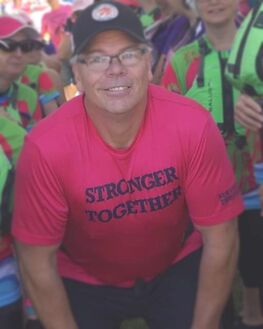 Alkame Staff Profiles
____
When it comes to paddling and Steve Wilkes, you will quickly realize that he isn't one to joke around in a boat. As an incredibly technical paddler, Steve has proven time and again that the better you are technically, the better you are overall. Excellent at executing, Steve's abilities in a dragon boat have always made his boat go faster. Oh, and even as a grandparent, Steve is one of the fastest PERG paddlers across Canada!
____
Having been a part of the dragon boat community for over 12 years, Steve has seen his fair share of racing. In 2017, it was time to expand his role in the dragon boat world, and he shortly thereafter began steering and coaching for local teams. In 2019, Steve became the Head Coach for the Cobourg Survivor Thrivers and over the winter, they held their very first indoor training season in over 20 years!
____
Steve, along with his wife Janis, are often seen at the majority of our dragon boat related events. Utilizing their own company, they have become the leaders of our Festival Logistics for the Alkame Festival Series. And when they are not helping with our festivals, they are helping at our indoor training facility, paddling with our club, or volunteering to run community events.
_____
As a seasoned paddler, Steve has been incredibly successful. He has competed at four CCWC's (Macau, Hong Kong, Italy, Hungary) earning multiple gold medals, he is an 8-time Canadian National Champion, and he was a member of the gold winning 2015 Canadian National Senior A Team.   On a professional level, Steve is a certified DBC Level 1 & Level 2 Coach, CPR/AED trained, and a licensed Boat Operator.
_____
Outside of dragon boat, Steve is an Entrepreneur. He is the owner and operator of both Better Go Getter Delivery Service (@better_go_getter), and GetintheLoop Northumberland (@getintheloopnorthumberland).
____
When asked: "What is the first thing you want to do when isolation is over?", he said:
"Hug my kids and grandson, and then get on the water to coach/steer/paddle a dragon boat! Oh, and get a good haircut!".